Alright guys, I know this post is long overdue, but here what is going on with 3 Stitches. We have signed with videopress, so they are now hosting our videos, and with them comes a new blog. So all of our new episodes will be at the wordpress link below. With the new provider it means that our format has also had to change. We will now podcast once a week for about 15 minutes. So one week Kathryn will podcast, and another Mum (Michelle) and so on.

Since blip no longer will host us, all of our back episodes (episodes 1-176) will be uploaded onto youtube. The links will replace the blip embeds on this blog. We will keep this blog for the past episodes, and the wordpress will be for the current episodes. Both will have links to the other so you can find us easier. You can also just search for us on youtube as well. :)

It is slow going for all of us, trying to get used to the new format as well as wordpress, but we will get better, I promise. I will podcast some time this week, and *hopefully* we will get on a weekly schedule again.

The new wordpress site can be found here...

http://3stitches.wordpress.com/
Posted by Lindy Lou at 2:23 PM No comments:

Since we here at 3 Stitches HQ are still without a solution to our blip problem, it seems you guys will have to make do with a regular blog post. Hopefully this will only be a brief problem and soon we can return you to your regularly scheduled podcasts.

But until then, we, or at least I will return to how we started and just blog. Which I honestly don't mind, I have actually missed once a week sitting down to a keyboard, a blank post, some music on Windows Media Player and recapping all the news and events from the week that are fit to type. It's not that I don't like podcasting, I love it, but it isn't the same. Weird, I know, I guess it's just another 'Lindsay Idiosyncrasy'.

In more ways than one have I gone old school. As most of you know from the last 1-2 podcasts, my computer had been acting up, and right after last week's podcast got uploaded Fabian got shipped off to California for repairs, leaving me without a computer for a week. Now usually this wouldn't be a big deal, since I spent the entire summer without a computer and all, but in a dorm in the middle of the semester is a different story. I have no tv, and now no laptop, which means I am left with my MP3 player, and a whole lot of time to fill. I know what you are going to say, "what about knitting??" and for short periods of time, but for a week in a quiet, quiet dorm? Yeah, no. Since I am still here and not a basket case, you can be assured I made it through, but not without the help of computer labs, my MP3 player and my cross stitch. My cross stitch thankfully took enough focus that with a bit of music, time passed rather quickly, making my trips to the computer lab less frequent than I had expected. All in all, my time spent unplugged wasn't altogether bad, it was nice to spend an extended time away from the computer screen and shake up my routine. But with the said (or typed as the case may be) I do like having Fabian back, and I now appreciate him more.

Besides all of the computer issues, things here have been pretty interesting. Somehow the power plant on campus was hit by lightening, in an area surrounded by big tall trees, the one story building was hit by lightening. How that happened I don't know, but because of it, we lost power Wednesday morning, and then to repair the damages power was cut at 1am Thursday morning for about 4 hours. I knew about the power outages, so I just set my cell phone alarm and went to bed. But I did learn that apparently roomie has no idea what uses electricity and what doesn't. She knew the power was out, or at least the trek up 8 flights of stairs in the dark clued her in, but she tried to use the shower and was surprised when our electric water heater wasn't heating the water. The refrigerator light wouldn't come on when she opened the door. The electric stove wouldn't turn on either surprisingly enough. And all of this would have been hilarious, if it wasn't for the fact that the belkin box that powers her dvr was incessantly beeping. And of course for some reason I was the only one bothered by this since she left again without turning it off! Needless to say I was a tad grumpy Thursday morning, or should I say later that morning.

So what became of all this cross stitch time you ask? Well, see for yourself... 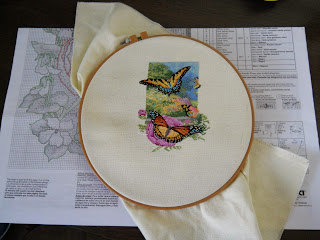 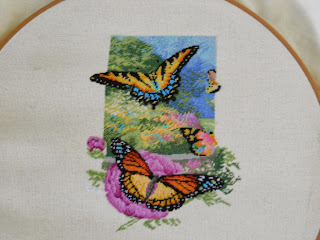 For those of you that don't remember what it looked like when I last worked on it over the summer, I finished the bottom butterfly, the rose it is resting on, and all the random green around the bottom and to the right (it will be something eventually, I promise).

I did get some knitting done this week, since I did need something to do before class, and over the weekend, just not the amounts that I am used to. On my sweater I managed to take the sleeves off, and work to about halfway down the torso. The only reason that much got done was because I had no homework over the weekend, so almost all my time was all spent in the computer lab with episodes of Casualty on YouTube and sweater knitting. Mariposa got an epic 5 rows done on it. Bad I know, since I had 3 hours of uninterrupted library time to knit on it, but using the computer lab was more of a priority and used up a lot of my time unfortunately. The antimony blanket got about 8-10 rows done on it since it was going with me to class, and it came with me to a 2 hour presentation I had to go to for extra credit. And as a surprise 4th project with progress, the bee leaf pi! On Sunday the residence hall I live in had a Texans game watch party. And if it wasn't for the 8 rows that I got done on it, those 3 hours would have been a total loss.

Keep an eye here for news on the podcast front, and we will do our best to keep you updated here, on facebook and on ravelry. But until then you will just have to be content with a boring old blog post. :)
Posted by Lindy Lou at 9:43 PM 2 comments:

http://youtu.be/gaG9XIvNvHg
Posted by Katie Jo at 7:12 PM No comments:

Posted by Knitalittle at 5:09 PM No comments: